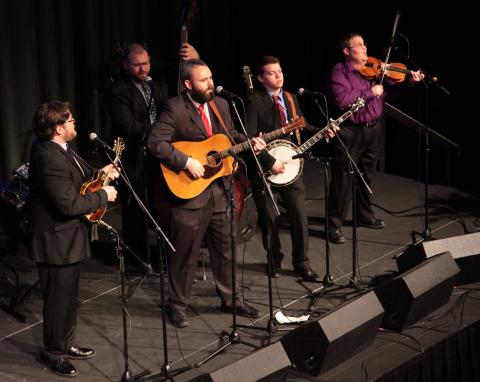 Michael Cleveland & Flamekeeper recently performed at the Corsair Trails Concert Series in Tawas City, Michigan to a packed house of enthusiastic fans. The band received a fantastic interview written by Jenny Jimenez for the Iosco News.

TAWAS CITY – From the opening number to the final song, Michael Cleveland and Flamekeeper commanded the audience’s attention during the 23rd annual Corsair Concert Series and kept the crowd moving the entire performance.
The bluegrass band from Indiana played the second of the three shows in the series and did so for a packed house on Saturday at the Family Center of the Tawas United Methodist Church.
Previous Corsair performances have always been entertaining but, oftentimes, there are almost as many slow-paced tunes as there are hard-driving ones – this was not the case when Cleveland and Flamekeeper took to the stage.
The band, which was established in 2006, performed the Corsair series shortly after they got together and made their return this year, much to the delight of those in attendance.
“It’s great to be back here,” Cleveland told the crowd. “Thank you for sharing your Saturday evening with us.”
Whether singing along, tapping their feet or clapping their hands, guests were immediately taken by the band, who have won four International Bluegrass Music Association (IBMA) awards for Instrumental Group of the Year.
Cleveland himself has taken home nine IBMA Fiddle Player of the Year awards and his accolades were proven to be justifiably earned, as he and his band didn’t miss a beat during their performance.
Each member of the group is talented in his own right, but it was the cohesiveness of the musicians which was most impressive.
For example, the voice of Nathan Livers, vocals and mandolin, when paired with that of Joshua Richards, vocals and guitar, is virtually flawless and creates a pleasant, well-balanced sound.
Tyler Griffith brought the performance full circle with his bass-playing skills, while 18-year-old Gaven Largent mixed it up the entire evening, showcasing his talents on not only the banjo, but the resophonic guitar and dobro as well.
The scene stealer of the evening, however, was Cleveland on the fiddle, who stayed true to his word when he was interviewed by this publication prior to the performance. He promised an upbeat show for the crowd and he certainly didn’t disappoint.
Whether cracking jokes or blowing people away with his seemingly effortless musical ability, Cleveland was clearly a crowd favorite.
He began playing the fiddle at age 4 and, once he started attending the Kentucky School for the Blind, he took string classes which focused on classical violin.
His heart remained with the fiddle and bluegrass music though and he honed his skills to the point where he has played at the Grand Ole Opry, just to name one of his many accomplishments.
Standout moments from the concert included performances of “Dark as the Night, Blue as the Day,” a cover which Cleveland originally recorded with Vince Gill, and “Too Late for Goodbye,” the band’s spin on a Julian Lennon song, featured on their third album, “On Down the Line.”
What really seemed to put the audience in a trance, however, was Cleveland’s blistering solo fiddle performance of “Jack O’ Diamonds,” with which the crowd became particularly engrossed.
As if Cleveland and Flamekeeper hadn’t already proved that the audience would be getting their money’s worth that night, the band upped the ante by bringing Lloyd Douglas on stage for the second set of the performance.
That name should sound familiar to Corsair regulars, since Douglas played the Jan. 31 show of the concert series with his band Detour.
Cleveland said Douglas has filled in for, and performed with, Flamekeeper since the group first started.
When Douglas picked up his five-string banjo and nailed his guest spot with the band, it was clear he has what it takes to be on the same playing field as this award-winning group.
“He lived in Nashville for 20 years and played banjo professionally with some of the top bands,” said concert organizer Gary Nelkie, of Douglas.
Another fun fact revealed by Nelkie: “Many don’t realize that Lloyd is the engineer who drives the Lake State Railroad locomotive through Tawas most nights.”
Not only did ticket prices allow for the audience to take in a great show on Saturday, but the proceeds raised from the event went to a good cause, that being the maintenance and upkeep of the Corsair cross country skiing and hiking trails in the Huron National Forest.