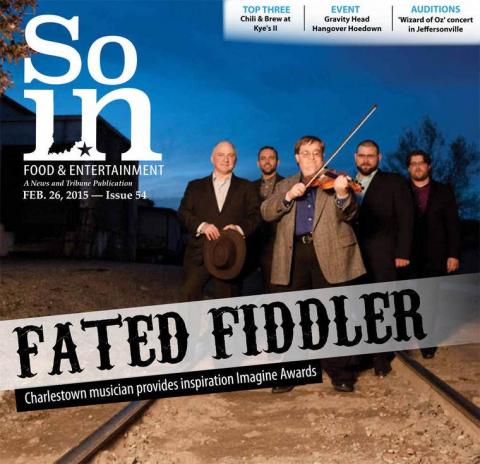 Michael Cleveland & Flamekeeper are proud to announce “Fiddlin’ Joe,” the first single from their Compass Records release, On Down the Line, has reached #1 on the National Bluegrass Survey’s Top 30 Songs chart for March. “Fiddlin’ Joe” was written specifically for the band by Mark “Brink” Brinkman, a 2014 nominee for IBMA’s Songwriter of the Year award. Additionally, “On Down the Line” has spent six months on the Top 15 Albums chart and is #8 for March and is #1 on SiriusXM Bluegrass Junction’s Most Played Albums chart!

Lauded as Michael Cleveland & Flamekeeper’s best album to date, On Down the Line features fourteen tracks that showcase the band’s rich instrumental blend and tight, three-part vocal harmonies with tunes that span from straight-ahead bluegrass (“Fiddlin’ Joe,” “Orange Blossom Special”) to melodic, heart-felt songs such as “Just Call Me Crazy” and the imaginative reworking of the traditional “Jack O’Diamonds” as a solo fiddle tour de force. The album’s second single, “Too Late For Goodbyes,” has made its debut on the March Top 30 Songs chart at #29.

With the success of the band, it is no surprise they have been invited to headline the Imagine Awards, an annual event produced by Rauch, Inc., a New Albany, Indiana based non-profit organization that supports people with disabilities and their families in nine area counties. Although Cleveland shies away from the notion that he is an inspiration to others, he is still humbled to be part of such a great event. “Being unable to see is my normal, I’ve never known anything different,” states Cleveland. “Still, I realize I’ve been able to accomplish a lot and I am honored to bring my band to the Imagine Awards and show people with disabilities that they, too, can accomplish anything they set their mind and heart on.” Cleveland is featured in this week’s edition of the News And Tribune’s “So In” Magazine!! with an interview about his involvement in the Imagine Awards.

The Imagine Awards will take place on Saturday, March 7th in Elizabeth, Indiana. More information on the awards can be found at www.rauchinc.org.