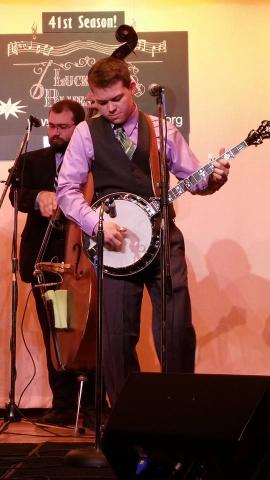 Michael Cleveland & Flamekeeper are proud to welcome Gaven Largent as their newest member. Largent will make his official debut as a Flamekeeper member in Nashville, Tennessee when the band plays the world famous Station Inn and SPBGMA Convention this weekend.

A proud Virginia native, Gaven Largent was born in Winchester to a musical family: his father is a church organist and his grandfather has played in several local bluegrass gospel bands around the Shenandoah Valley. Largent was first introduced to bluegrass by his aunt and uncle who had an extensive collection of traditional bluegrass records and took him to many shows around the area. He started playing the guitar at age eight and a year later began playing resophonic guitar, his primary instrument. At age ten Largent began playing the banjo and soon started entering contests around Virginia, West Virginia and Maryland. To date, Gaven has won numerous contests including: Best All Around Performer at the Galax, VA Fiddler’s Convention (2010); 1st place in the Maryland State Banjo Competition (2008); and 1st place in the Galax Dobro Competition (2008, 2010). In 2009 he was honored to be an invited guest performer with Rhonda Vincent and the Rage at the Ryman Auditorium and the Grand Ole Opry. Since 2012 Largent has performed in several bands including Bud’s Collective and Lonesome Highway. He plays a Gold Star banjo and endorses Schoonover Guitars.

Largent will be replacing former Flamekeeper member, Glenn Gibson, who took a break from traveling the end of 2014. “Gaven is an incredible musician who plays way beyond his years,” stated Michael Cleveland. “He has his own style on both banjo and dobro and he definitely has the flash to go along with it. He knows when to play and when not to, which is sometimes most important. You can tell that he listens to everyone around him and does his best to compliment and enhance the sound of the band. I’ve been fortunate enough to get to play with some really incredible musicians, but I’ve never heard someone so advanced for his age.”

Michael Cleveland & Flamekeeper will perform in Nashville at the world famous Station Inn on Friday, February 6th and the National SPBGMA Convention on Saturday, February 7th.