New Single – “Too Late for Goodbyes” from Michael Cleveland & Flamekeeper 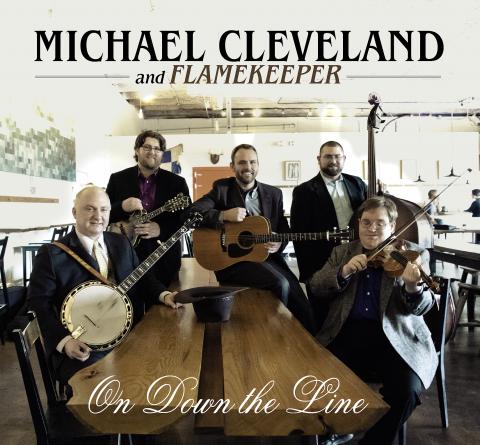 Michael Cleveland & Flamekeeper announce a new single from their latest album, On Down the Line. “Too Late for Goodbyes” is a hard-driving bluegrass take on the Julian Lennon hit from 1984. Propelled by instrumental trades between banjo player Glenn Gibson and Cleveland, the bluegrass version is an unexpected twist on what was originally a rock song steeped in the electronic synth sounds of the era.

“Singer Josh Richards tackles Julian Lennon’s “Too Late For Goodbyes” to open proceedings and it makes for a far more effective bluegrass song than you could have imagined.” – Martin Jones, Rhythms Magazine

“On Down the Line, a terrific record by any standard, illustrates the band’s elevated cohesion and vibrant interplay even as it highlights the selflessness Cleveland brings to his bandleader’s calling.” – David McGee, Deep Roots Magazine

On Down the Line is led by nine-time International Bluegrass Music Association’s Fiddle Player of the Year, Michael Cleveland. Michael is currently celebrating his 2015 SPBGMA nomination for Fiddle Performer of the Year. The group’s virtuosic style and traditional bluegrass sound have never been better represented or received such high praise.

Call you favorite radio station and request “Too Late for Goodbyes” by Michael Cleveland & Flamekeeper today!